This is very common problem. All arowana keepers will run into this problem at one time. The cause(s) are often not clear and unspecific. Proper tender loving is very important. Should any cause be identified, immediate action is advisable. 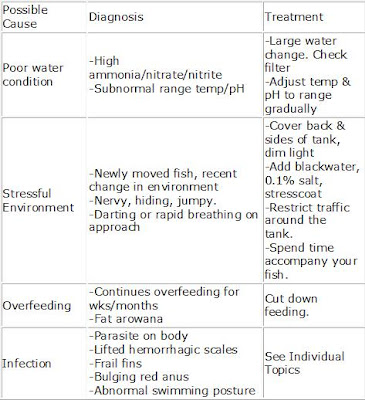 Large water change mean 50% of conditioned water change. Make sure all the parameters of the new water is adjusted identical to the tank water, esp. temperature and pH. It is then followed by 30% water change every 2-3 days until the fish condition improved or the water quality improved.

To reduce stress of arowana, you may cut some black garbage bag into strips and put weight on one end. Make sure you wash the strips before using them. They will act like artificial plants that create refuge area for the arowana. Remove them gradually when condition improved.

Overfeeding is often a problem. When they are over feed continuous for weeks or months, they start to lose appetite and refuse eating, the appetite will come back, just cut down the feeding.

After arowana was frighten, it is not uncommon for them to loss appetite for a while. This sometimes last for days or even weeks. It is important to identified the cause of the flightiness and delineate it. At the same time, give the fish a calm environment and tender loving care. Staying in front of the tank frequently make the fish get use to you and adapt to the environment faster. The fish will also develop a bond to you if you do it often.

This is not a disease, it is most probably cause by change of nature to captive environments which encourage the fish to look side and down rather then up. The 2nd most popular hypothesis is overfeeding. Genetic is the biggest factor in this problem.

Prevention is better than cure. Get a low tank. Avoid overfeeding, use floating food if possible. But most importantly do not buy the fish is you suspect dropeye.

There are other propose treatments for this problem. They included, adding ping pong ball and red flashing light into and above the tank respectively, putting a tank of cricket above the tank, pushing the eye back manually, operation, etc. I do not recommend the last three methods as they have high mortality rate.

As the name suggested, a film of white converging form over the cornea of the eye due to various reasons. Majority of them are mild and do not need antibiotic. However this condition must be treated seriously as its high morbidity and possible mortality should condition got worst. 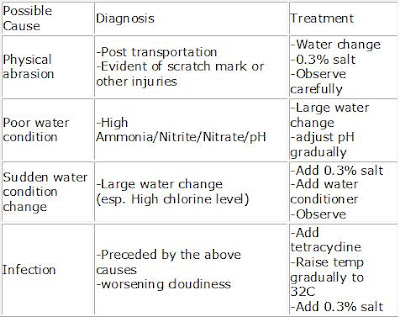 Cloudy eyes usually take days to heal except infective cause, which might take weeks to month with or without permanent damage. Infective cause of cloudy eye without preceding insult is uncommon. It occur only if the fish general condition is very bad. Although nutritional cause of cloudy eye is not proven in arowana, it is theoretically possible.

In this condition, the gill cover of the arowana curl outward, initially involving only the solf part of the cover and later the hard gill cover. If the cause is not removed, condition will get worst, gill will get exposed, causing breathing difficulty and making the gill prone to infection. The end result could be fetal.

This is a very unique syndrome affecting more on Asian Arowanas then its Australian and South America counterpart, it is also more common in younger arowanas. In this syndrome, the head of the fish start to get oedematous(swollen) followed by a layer peeling off from the skin, starting from the front of the head and moving backward.

Activated carbon is believe to be the cause due to its close association with the syndrome. It is thought that activated carbon removed vital element in the water and hence disallow the head tissue to form normally. Other hypothesis around include irritation by the microscopic carbon particle deposited on the head. Healing is usually complete and occur within days when carbon is removed. Zeolite product could cause similar problem too but less severe and less common. Large arowana is less sensitive Head-rot Syndrome.

This is the sudden, clean breaking of rays of fins(esp. ventral and tail) which appear like being cut. This usually occur when the fish is under tremendous stress, e.g. jumping out of tank. It is believes by some a natural mechanism for the fish to break away from the predator when caught. similar to tail-dropping mechanism of some lizard.

Unfortunately, when this happen, the chance of the fin recovering to its original beauty is slim. Even when the breaking gap is not visible, the broken rays will atrophy and end up slightly smaller and shorter than the others. On the other hand, if the broken fin drop out spontaneously or cut out, the chance of a visible band in regenerated fin is high. In this situation, it is not uncommon that keeper choose to re cut the whole fin and wish for the fin to grow back more even. But then, the outcome is again unpredictable.

Unlike Tail-Drop Syndrome, the tear is between the fin rays and run parallel to the rays.

This is common and quite benign. They heal fast, sometime within days. X back golden is especially prone to this.

Arowana is a fish with great force, it is not uncommon for the fish injured by its own force while darting around. Barble is important part of arowana as many believe it signified the horn of the dragon. Hence it is important for arowana to have perfect barble. Regeneration of barble occur from the base of the barble. If this area is also injured, the damage could be permanent.

If the base of barble is not injured, full recovery can be expected. Barble can be cut near the edge and allow it to regenerate. If the base is injured or the cut barble do not regenerate, a sterile needle puncturing the base just enough to cause bleeding can be done to stimulate growth. It is sometime good ideal to cut both barble rather than only the broken one so that they can grow out symmetrically.

It is important to provide good water condition during the recovery phase to promote healing and prevent infection. Feed the fish good balance diet, add 0.3% salt & acraflavine and do more frequent water change. Avoid small tank which will result contant rubbing of the barble onto the glass. This might result in deformed barble. Sign of regeneration can be seen in about 2 weeks time, full recovery take months.

Regeneration of the scale is fast and take only days to weeks. However, it takes months for the color of the new scale to catch up with the rest. The is a chance that the scale might look different in color compare to the rest.
Posted by Happy brother sister at 9:17 PM